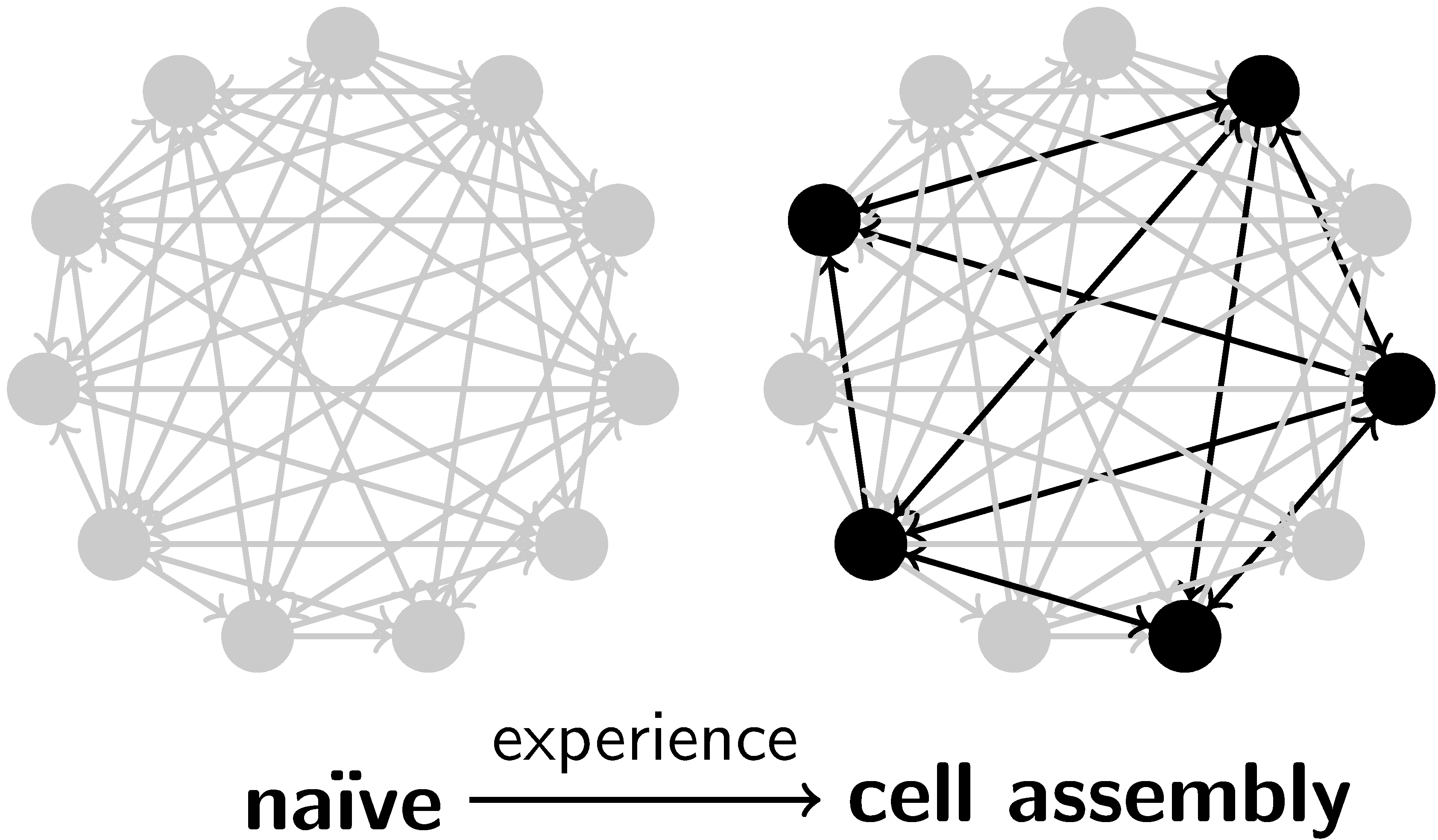 Neuronal circuits in our brain are plastic, a fact that we use to form memories. As we go through life we constantly form new memories and recall things we already know. One of the most iconic concepts of memory formation is the notion of the Hebbian cell assembly.

A Hebbian cell assembly is formed when an ensemble of neurons is repeatedly co-activated. This co-activation is thought to trigger experience-dependent “Hebbian plasticity” which causes a strengthening of the excitation connections between the co-active neurons. This so formed assembly can now be seen as an associative memory engram. The memory can be recalled by only activating a subset of the neurons within a given assembly. By dint of the strong connections, the activity can then spread to re-activate the whole assembly.

While there is increasing experimental evidence for this assembly hypothesis, learning Hebbian assemblies in neural network models poses several interesting challenges for the underlying plasticity rules. Let us now try to understand one of these challenges a little better.

When we recall a concept, largely the same neurons and brain areas are activated as if we were to directly experience the concept. But if the evoked and “recalled” activity looks the same, or at least very similar, how does a synapse know when we are only thinking of something as opposed to experiencing it? In other words, when should a synapse, which has access to limited information, update its synaptic states that represent its beliefs about the outside world and when should it lay still and do nothing? Somehow biological neural networks are incredibly good at this so-called online learning. A large part of our research is dedicated to the question of how neural circuits achieve this feat.

The need for rapid compensatory processes

While Hebbian plasticity is believed to form associative memory traces or engrams and is has been found in different flavors in wide parts of the brain, it is still not entirely clear why memories, once formed, remain relatively stable when we recall them or other memories stored in the same network. It has been known for decades that Hebbian plasticity needs to be constrained by one or several forms of negative feedback mechanisms to counteract the positive feedback generated by Hebbian plasticity alone. Multiple theoretical works have suggested different ways of achieving this. For instance, by re-scaling or limiting the growth of synaptic weights (von der Malsburg, 1973, Miller and MacKay, 1994). In models, these mechanisms are often chosen to act rapidly or even instantaneously.

Experimentally, on the other hand, the probably best-characterized form of homeostatic plasticity, which was  discovered in the nineties, is called synaptic scaling (Turrigiano et al., 1998). Its characteristic timescale is on the order of hours to days. Hebbian plasticity in the form of STDP or classic LTP induction protocols, on the other hand, can be induced in a matter of minutes.

This discrepancy of time scales between the two mechanisms, however, poses a severe problem for stability in neural network models (Zenke et al., 2013) — imagine driving a car while your average reaction time is orders of magnitude larger than the time it takes you to reach the next traffic light… To avoid an explosive increase in neural activity, models actually need rapid compensatory processes (RCPs) which are much faster than experimentally known forms of synaptic scaling. One mechanism which could achieve this is heterosynaptic plasticity (Chen et al., 2013, Chistiakova et al., 2014), but it is conceivable that network-wide mechanisms possibly related to synaptic inhibition may serve a similar purpose.

Hebbian and non-Hebbian plasticity orchestrated for learning and stability

The idea behind what we called orchestrated plasticity in Zenke et al. (2015) or Taro Toyoizumi et al. (2014) call intrinsically stable plasticity, is that multiple competing plasticity mechanisms at the synaptic level are working hand in hand such that they cancel each other most of the time. Thus during regular network dynamics (e.g. background activity or the recall of memory patters) weights hardly change (see video below). Synaptic change and learning only takes place when it is needed to either form new memories (or potentially update or even overwrite old ones). Interestingly, the requirements for this can be fulfilled by purely local rules acting at individual synapses. However, the idea entails that single synapses express a well-orchestrated combination of both Hebbian und non-Hebbian forms of plasticity.

For our current work, we are largely interested in understanding which RCPs exist at biological synapses or at the network level (and why we seem to have missed them so far in many of our models). Because this topic is vital to understanding network-level plasticity, we are always eager to talk to experimentalists who work on plasticity and in particular, the ones who might be interested in (or already are) exploring these avenues in their experiments.